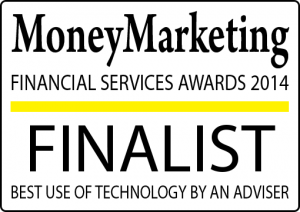 We are absolutely delighted to announce that Kennedy Black Wealth Management has been short-listed for a Money Marketing Award – for the second time in three years.

This time we’ve been short-listed in the ‘Best Use of Technology by an Adviser’ category, specifically for our new INTELLIGENT WEALTH MAP™ financial planning tool and Titanium Portfolio Review tool.

We were short-listed with four other firms (one of which is Lloyds Private Bank) and were invited to interview in January.  The winners were announced at a gala dinner at the Grosvenor House Hotel in London, one of the main events in the adviser calendar.

The Money Marketing Awards have been running for 23 years and are among the pre-eminent national awards for the adviser community.  Money Marketing is a leading industry publication, having been awarded “Best Professional/Trade Title” at the Santander UK Financial Media Awards in November 2013.

In 2012, Kennedy Black Wealth Management was short-listed for ‘Small Company IFA of the Year’ at the same awards.